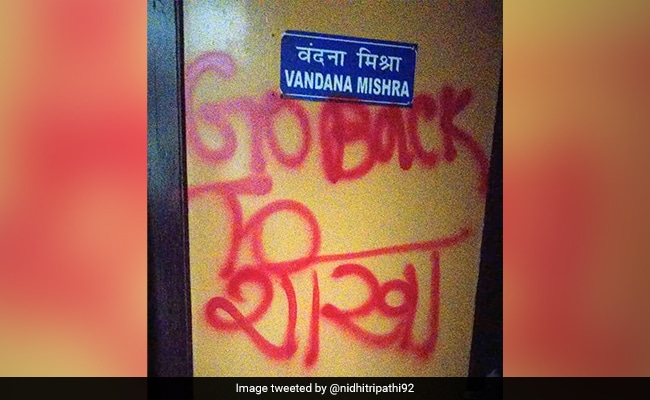 A number of partitions and school rooms at Jawaharlal Nehru College (JNU) in Delhi had been defaced with slogans towards the Brahmin and the Baniya group yesterday – images of which had been shared on social media triggering a row.

The Vice-Chancellor of JNU in an announcement condemned the incident and mentioned a probe has been ordered into the incident.

“The Dean, Faculty of Worldwide Research and Grievances Committee have been requested to inquire and submit a report back to the VC on the earliest. JNU stands for inclusion and equality. The VC reiterates zero tolerance for any sort of violence on campus,” mentioned Vice-Chancellor Santishree Pandit’s workplace.

Pictures shared on social media confirmed partitions and school rooms painted with “anti- Brahmin” slogans akin to – “Return to shakha”, “Brahmins depart the campus”, “Brahmins-Baniya we’re coming for you” and “There might be blood”.

A number of college students and lecturers on the college have referred to as for motion towards these accountable. RSS-affiliated college students’ union, Akhil Bharatiya Vidyarthi Parishad (ABVP), accused the left of the vandalisation.

“ABVP condemns the rampant vandalisation of educational areas by communist goons. The communists have written abuses on the partitions of JNU within the Faculty of Worldwide Research- II constructing. They’ve defaced chambers of free-thinking professors to intimidate them,” mentioned ABVP in a tweet.

A JNU lecturers’ physique additionally shared the photographs of some school rooms painted with “anti-Brahmin” slurs.

Whereas the Left-Liberal gang intimidate each dissenting voice, they attraction to elect EC representatives that “can assert the values of mutual respect and civility, & equal & simply therapy of all.”
‘civility’ & ‘mutual respect’.
Extremely deplorable act of vandalism! pic.twitter.com/pIMdIO9QsX

Featured Video Of The Day